The Bank for International Settlements (BIS) has decided to allow banks to hold up to 1% of reserves in cryptocurrencies such as Bitcoin (BTC), despite its sceptical approach to the asset class in the past, as well as the recent cryptocurrency market downturn.

A June 30 report by the BIS’ Basel Committee on Banking Supervision (BCBS) suggested that banks’ total exposure to “Group 2 digital assets” should be capped at 1 percent of their core capital. The BCBS included this suggestion in its recently released document known as “second consultation on the prudential treatment of crypto-assets.”

The report can be read here.

The below is a visual representation of the two groups: 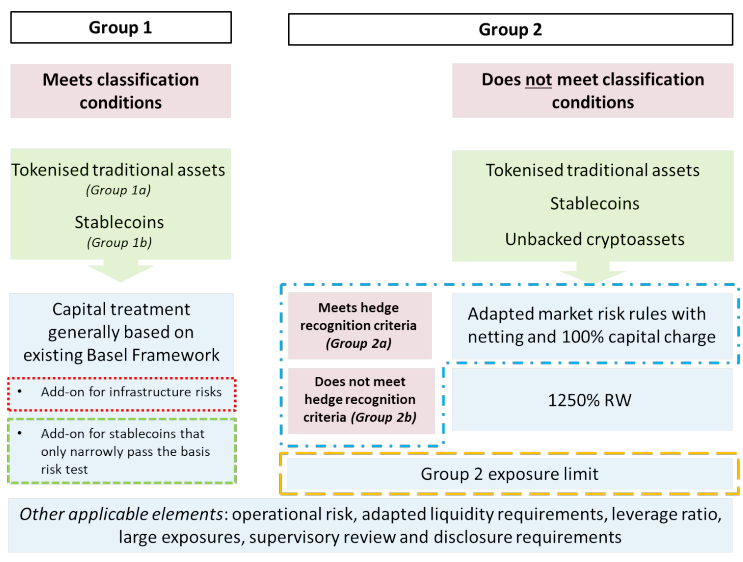 The document also specified that “a bank’s total exposure to Group 2 crypto assets must not be higher than 1% of the bank’s Tier capital at all times,” in line with the Basel Framework which includes all the BCBS’s standards. As it explained:

As this is the case, “the Committee proposes, therefore, to introduce a new exposure limit for all Group 2 cryptoassets outside of the large exposure rules.” Meanwhile, this provisional limit set at 1% of Tier 1 capital would be reviewed periodically.

Group 2 cryptoassets will consist of stablecoins, unbacked crypto assets, and tokenized traditional assets that didn’t meet those criteria. In contrast, Group 1 cryptoassets have the same assets mentioned above but meet the BCBS criteria.

The Committee is awaiting comments and suggestions from the banking community until the end of September and promises that until this date it will closely monitor the rapidly changing and unstable cryptocurrency market. The standards, which the Committee intends to complete by the end of the year, could be tightened if shortcomings in consultation proposals are identified or new elements of risk emerge.

As mentioned, the BIS has taken a very sceptical approach towards digital assets, particularly given the recent market collapse, warning about the materialisation of its predictions about the dangers of decentralised finance (DeFi).

Irrespective, it’s good to see the BIS extending their hand to a new asset class and pushing forward in legislation and regulation, much of what is currently needed in the cryptocurrency market.