In late January we detailed the exciting rumours surrounding Intel’s development of a specialised “ultra-low-voltage energy-efficient Bitcoin mining ASIC” known as the “Bonanza Mine”. This can be read here.

It has been quite a journey, with the project initially becoming known to outsiders by its Bonanza Mine codename. However, in early April, it indeed unveiled its new Blockscale ASIC, which promised strong performance for proof-of-work consensus networks. Its move into blockchain is a relatively recent endeavour for Intel, but is perfectly in character for a company with a long history of entering new markets.

Moreover, it announced a flurry of design wins from heavyweights in the cryptocurrency mining industry such as Argo Blockchain, GRIID Infrastructure, HIVE Blockchain and others.

Intel is getting into the discrete GPU business because of the massive market opportunity and upside it presents, with blockchain representing a similar opportunity with vast potential.

Although the cryptocurrency market (and wider financial markets for that matter) are experiencing a seriously harsh downturn, and the timing may not be ideal, Intel’s Raja Koduri just tweeted that the Intel AXG Custom Compute team’s Blockscale ASIC has begun shipping. 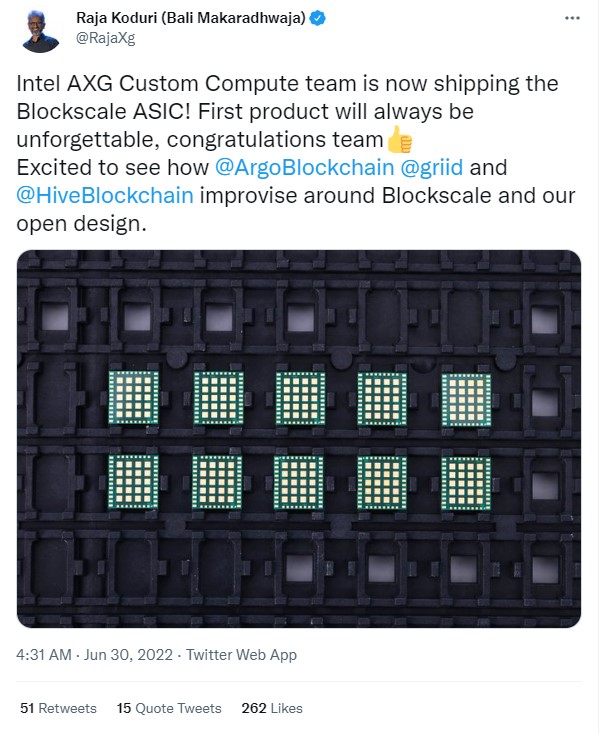 Koduri offered his congratulations to the ASIC development team, as they begin to ship the Blockscale ASIC in Q2, beating their own Q3 2022 projection. The Intel AXG boss added that he was looking forward to seeing how partners would “improvise around Blockscale and our open design.”

If you would like specifics on the product, a brief can be be read here, with the specifications being:

Intel has previously claimed the Blockscale ASIC provides “over 1000x better performance per watt than mainstream GPUs for SHA-256-based mining.”

They have labelled it as “energy efficient hashing for the future”, stating that cryptocurrency mining increasingly demands customised solutions to meet power, efficiency and other unique requirements.

It is a “new generation of ASICs”. Intel Blockscale ASICs are built for the demanding environment of cryptocurrency mining. Each ASIC has built-in temperature and voltage sensor capabilities. The accelerator can be operated across a range of frequencies, enabling system designers to balance performance and efficiency. The Intel Blockscale ASIC is supported by a reference hardware design and software stack to jump-start system development.

No doubt readers and cryptocurrency mining enthusiasts will be highly interested in these. Although Intel’s timing does seem weird with the current market state, with another cryptocurrency boom on the horizon, there will definitely be further GPU and ASIC booms too.