This week we cover:

Over the past 4-6 months, Bitcoin has been gaining considerable popularity within the mainstream world of finance. This week marked another milestone when Bitcoin hit $18,476, and is persistently on its way to reaching all time highs. With this momentum happening, Bitcoin is now being described as a potential global reserve currency and 100k in 12 months is not far from a reasonable assumption.

Let’s looks at why Bitcoin is a unique store of value:

When you dissect Bitcoin like this, it has all of the winning ingredients for a superior store of value and has huge potential to surpass a figure far higher than what we have currently seen.

Here is a a fantastic quote posted on CoinTelegraph to summarise the general outlook/sentiment through the Mining Store Community:

“I may be on the bullish side for Bitcoin’s 12-month price trajectory, but I truly believe that time will be our best friend.” 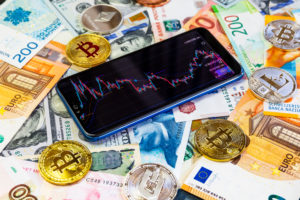 Ethereum to follow bitcoins bull run in the very near future

Whilst BTC has continued its bull run of over $18,000, many traders and analysts are looking toward Ethereum as the sentiment strengthens and the likelihood of a ETH rally is increasing.

What are the catalysts of an ETH rally?

As it stands, there are two important factors to take into account when considering a rally. Firstly, a large portion of bitcoin capital could move into ETH off the back of the Ethereum 2.0 announcement. Secondly, ETH tested a major resistance level, increasing chances of a rally. If we look at previous trends, a Bitcoin surge causes altcoins to follow suit meaning we are at optimal timing for such an event to occur.

The recent power of Bitcoin has caused other coins to take quite the hit, but the price action on bitcoin has shown the bullish outlook on crypto returning. For example, a breakout in BTC could potentially trigger more capital to separate across higher risk moves, including Ether.

Defi tokens like Yearn.finance’s YFI and Uniswap’s UNI surged by almost 30%, after Ether recovery which further highlighted that the broader Ethereum ecosystem could benefit from the btc’s bull run.

Quote from Denis Vinokourov, head of research at crypto exchange and broker Bequant, displayed on cointelegraph:

“All eyes may be on Bitcoin and the surge past the $18,000 level. However, the recent development update related to Ethereum may result in some capital rotating back into Ethereum and its broader ecosystem. This isn’t to say that Bitcoin will be actively sold, but the trend in locking Bitcoin on the Ethereum network may accelerate and be put to work across oversold DeFi and DEX tokens such as Uniswap.”

In conclusion, with Eth 2.0 playing a major role in bettering the whole ecosystem of Ethereum and Defi, the strength in BTC/ETH trading pair and the history showing that ETH follows a BTC bull run, a rally is likely to occur. An important point to consider – Around one month after BTC’s bull run in 2018, ETH achieved it’s all time high of $1,419.

Is a blockchain based voting system a must?

Following the recent election between Trump and Biden, question marks have hovered over the current voting system, and many prominent figures in the digital world have looked towards blockchain as the saviour to mitigate any controversy in the coming years.

As we all know, blockchain technology is perhaps the most cutting edge development of this era, and has recently been gaining some real status as the BTC bull run continues to grip the market. Not only that, but many innovators are looking at ways to incorporate blockchain into their infrastructures.

To name a few…

Let’s revisit why this would greatly improve our current voting system. Recently, Binance’s CEO Changpeng Zhao and Ethereum co-founder Vitalik Buterin, have both publicly announced their passion behind this substantial implementation. They believe that such a voting system would reduce the outcome time of a decision, strengthen voters’ privacy, and completely eradicate questions surrounding the credibility of results.

Founder of Cardano, Charles Hoskinson also believes that blockchain based voting could make a huge difference and has suggested his company have already been working on building the infrastructure for such use. The integration of blockchain can be incredibly sophisticated, which results in many difficulties, but knowing what we now know, blockchain and the world of cryptocurrency are only looking one way, and that is north.

Yet again it comes as know surprise seeing the Fear & Greed index at ‘Extreme Greed’. The general sentiment of Bitcoin right now is incredibly bullish. Surpassing the $18,000 mark shows immense potential in this digital powerhouse. However it’s very important to be aware of what could cause a slight drop in the market. For example, USA health crisis is getting very serious & ICU beds are almost full. Long term, BTC certainly has incredible potential but these are major risk events to keep in mind. 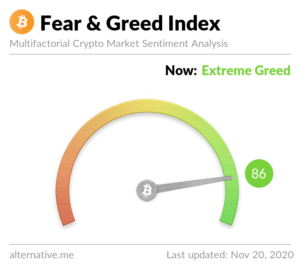 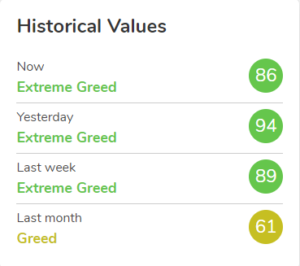