😆 El Salvador bought the dip, and missed the bottom by 7 minutes 😆 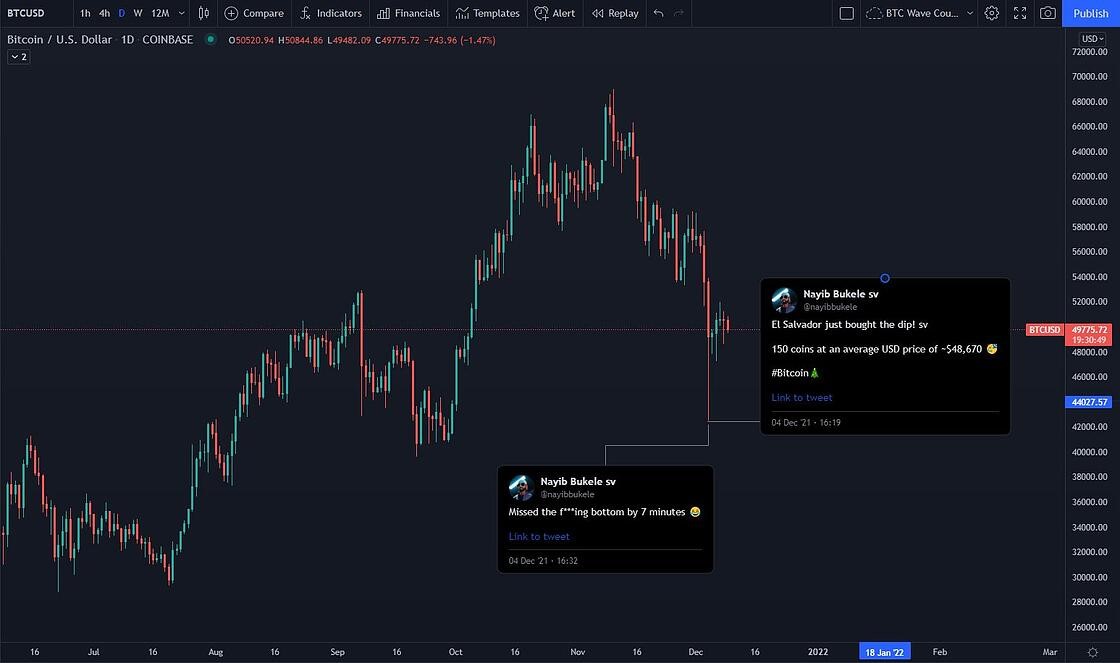 Congress gets a crash course on cryptocurrency.

Over the past 24 hours, 6 major crypto CEO’s testified in front of congress as to why cryptocurrency is more secure and more transparent than the current financial system. The hearing was called by Representative Maxine Waters, the California Democrat who leads the committee, as part of an effort to understand fast-growing digital assets — and how to regulate them.

Blockchain is as much about transparency as it is about security. As you know, every single block that is validated is publicly visible to the network. Furthermore, blockchain is based on a consensus mechanism, before you can make a change to a ledger you have to have a significant majority of all of the validators who agree on the correct change. In our current financial system, one bad guy can defeat the entire system. Blockchain is critical to our security infrastructure as it prevents this scenario from taking place – comments from Brian Brooks the CEO of Bitfury in front of Congress.

There has also been movement here in Australia. Treasurer Josh Frydenberg said The government of Australia will announce the biggest reform in payment systems in 25 years, including crypto. In an attempt to modernize Australia’s payment systems, the new regulations will broaden the definition of services and products that can be regulated, moving cryptos out of the grey and into the world-leading regulatory framework.

Reading between the lines here, there are big plays taking place from the regulatory standpoint. If you are wanting large scale adoption, then regulation will pave the way. If regulation moves into the market, large investors who were on the sidelines will no doubt begin to step into the market due to the increased security. Regulation change will also provide opportunities for other crypto-related financial products.

Despite the recent correction across the cryptomarket, this news is only positive for the long term outlook. 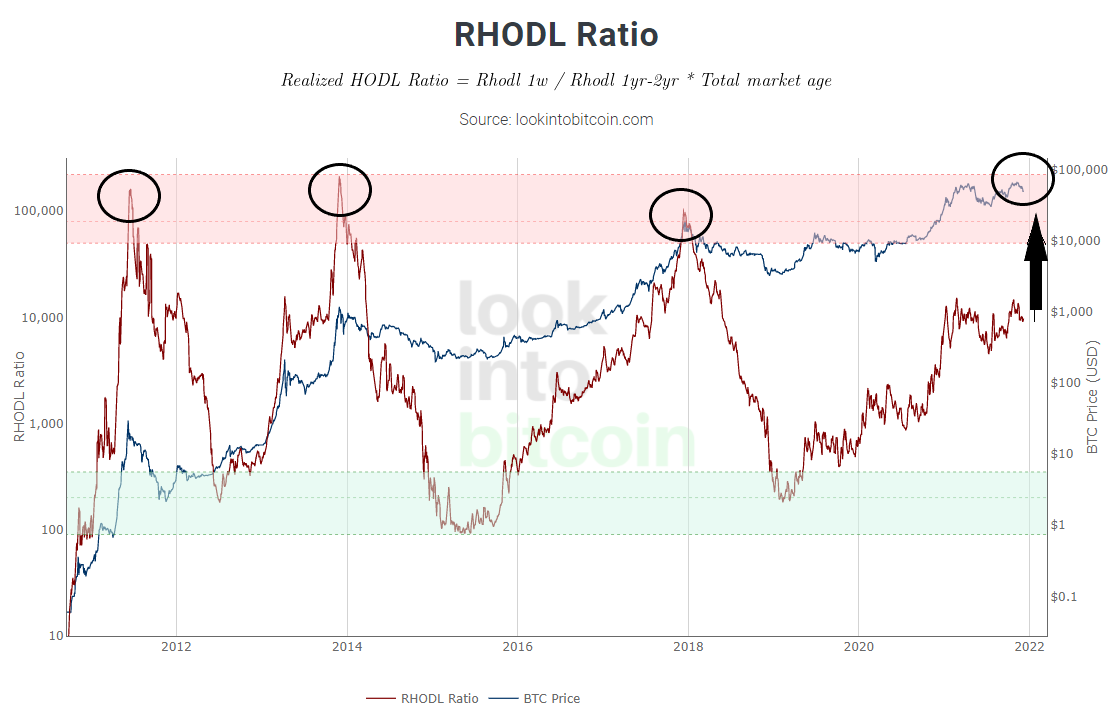 The Realized Value is the price of UTXO’s (coins) when they were last moved from one wallet to another. As the RHODL ratio increases, it suggests large/whale investors are moving coins that have matured in price as BTC runs into a top in the market. Essentially they are selling BTC at the major bull market peaks. This particular indicator has had a 100% success record in predicting tops in the market.

Despite the recent long squeeze as BTC broke down from the rising channel structure. Most indicators are not suggesting a major cycle top is in play. They are actually suggesting the recent pullback is a midcycle adjustment. 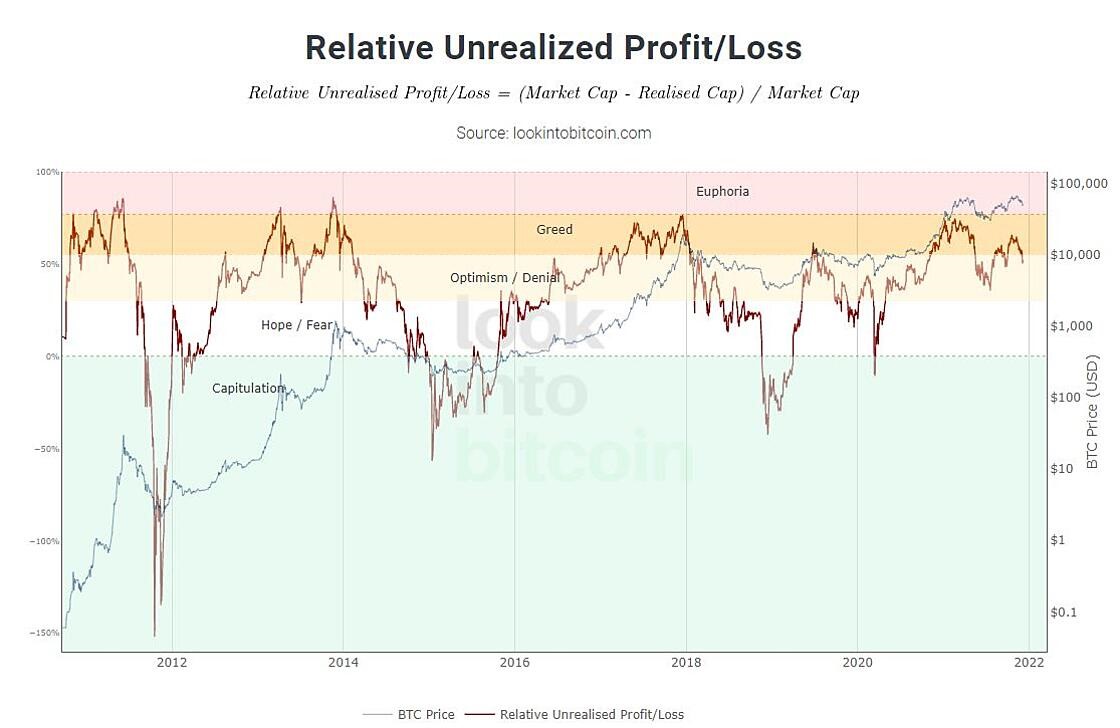 When do pullbacks in the market occur?

All financial markets are sentiment-driven. Greed and fear are the driving force behind sentiment shifts in the market. The relative unrealized profit/loss can provide an insight into retail trading psychology. When retail investors reach a euphoria stage the market becomes overly bullish as most investors are in profit. This leads to careless investing and generally ends badly. Leading into major BTC bull run peaks, investor relative unrealized profit and loss generally runs through the greed area and into euphoria. A long term investor can monitor these charts as they will provide you with sell signals. Again, this chart is indicating a mid-cycle adjustment rather than a euphoric top. 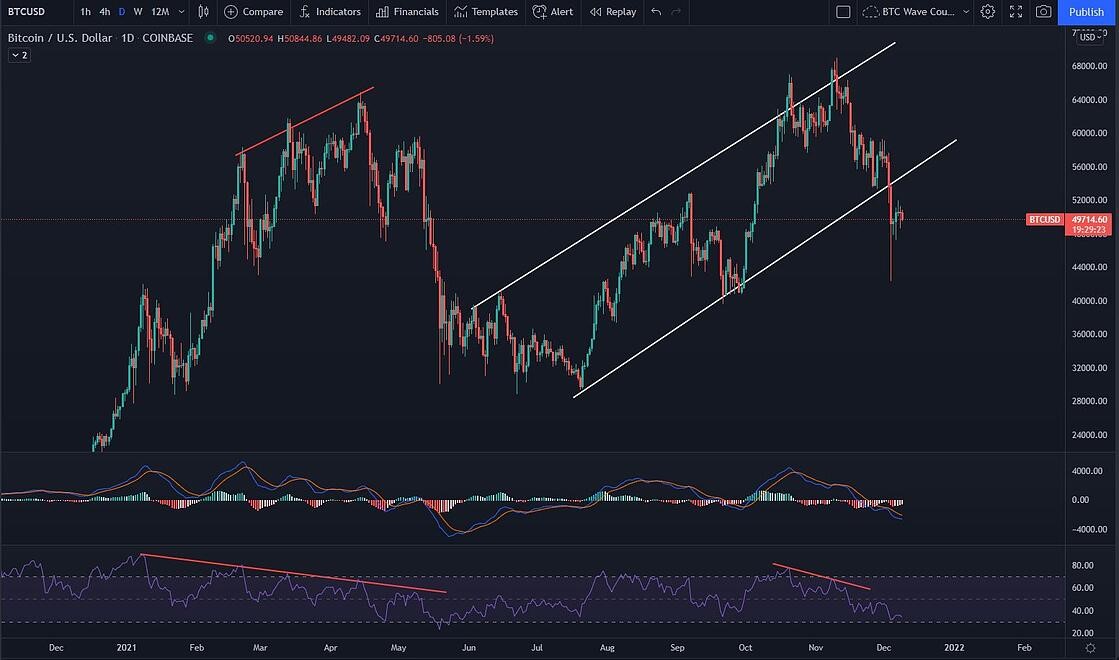 BTC has taken a sharp downturn outside of the rising channel structure and moved just shy of our 40k downside target. For the time being, we will be watching for a consolidation phase before the next big move.

That is all for now,