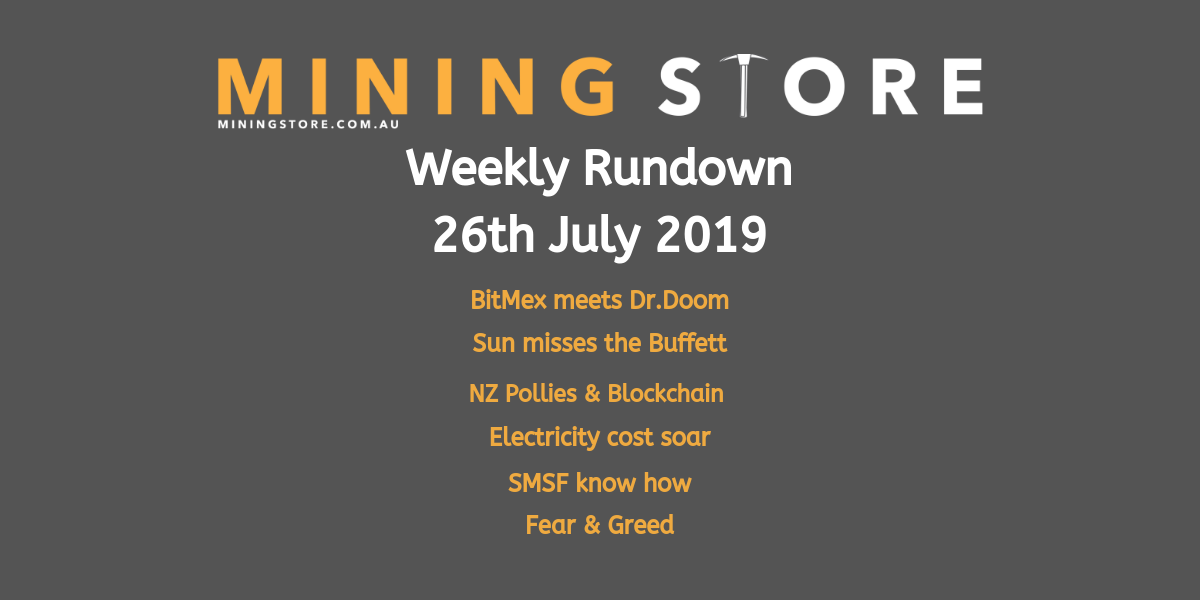 Earlier this week, US economist Nouriel Roubini aka Dr Doom (who was once described as a ‘Bitcoin sadist’), criticised Seychelles-based BitMEX for violating strict US regulations which prevent American citizens from trading on their platform. Roubini went so far as to accuse the platform of aiding in money laundering and referred to BitMEX CEO Arthur Hayes as a “thug”.

This news alone probably wouldn’t have afforded too much attention, but it seems to have spurred a United States Commodity Futures Trading Commission (CFTC) investigation into BitMEX – which is certainly big news for them!

Just a day after the CFTX investigation started, data experts at Token Analyst tweeted that total Bitcoin outflows from the BitMEX platform exceeding inflows by $73Million, signalling that its most likely the U.S. citizens that are using the platform are heading for the exits.

Right in the middle of the regulatory storm there was a flash crash in ETH and BTC signalling even further speculation that BitMEX is orchestrating flash crashes to liquidate its retail traders. Large whale movements can be seen within bitcoin wallet addresses leading up to these moves. In May, a large bitcoin selloff heavily impacted Bitstamps’s order books to the tune of $250M USD in long liquidations on BitMEX. It can’t be denied that BitMEX is the king of the futures markets and the most liquid. However, bigger isn’t always better. While a lot of this is out of your control as a trader, unless you’re one of the lucky few whales, it’s best to keep yourself educated and on top of what’s happening. Knowledge is power. Playing the margin and leverage markets is high risk, even in a regulated environment but when unusual volume movements come into play it’s almost always best to stay clear of the clouded platforms. Remember if you are upping your leverage 100x and crypto moves even 1% it could be enough to liquidate your entire account. Stay smart and stay safe.

There are 3 key indicators to watch for Bitcoin price action:

Overall this week Bitcoin has definitely been looking bearish, with Thursday seeing a good increase in buying volume enter the market, conditions look to be swinging towards bullish territory.

The highly anticipated meeting between Justin Sun of blockchain platform TRON and business legend Warren Buffett took an unexpected turn this week when Sun postponed his scheduled lunch with Buffett citing ill health. Sun had paid a record $4.6M at a charity auction for the chance to sit down with Buffett and the cancellation has drawn widespread criticism from the crypto community with concerns Mr Sun isn’t the right person to be representing crypto and bitcoin ideologies to Buffett, the latter of which has no qualms publicly acknowledging his disbelief in crypto as an asset. TRON has had its fair share of the spotlight lately, as earlier this month their offices in Beijing were raided with allegations of scams and Ponzi schemes offerings. Coinspice Editor Hayden Otto tweeted the below footage showing almost a dozen uniformed police officers at the raid:

And by the way, in case you were wondering, just a day after postponing, Mr Sun is back to full health and able to get back to work…

New Zealand political group Opportunities Party, just gave their 4,500 members the opportunity to vote for their next leader via Horizon State, an anonymous voting platform backed by blockchain technology. Horizon State said they are so busy working on four top secret new clients that they are unable to attend the Consensus event in New York this year, that’s a pretty big deal given consensus is considered the biggest crypto event every year. It’s great to see a New Zealand tech company thriving in this space and broadening the global reach and reinforcing the value of blockchain and its many capabilities.

It’s not new news to the miners in our community that electricity rates continue to rise. The table below shows a selection of rates across the world as at March 2019.

The numbers reflect all in costs related to electricity consumption, not just usage, these include distribution, various environment and network charges, so we’re comparing oranges with oranges.

The disparity between times of day, states and municipalities can be quite large. For example, Australia ranges between 0.15 and 0.40. If you own your own home it’s always worth looking into options for solar subsidies, network credits and free daytime electricity.

Over the last few weeks I have written a lot about the global economy and whether we are headed to another deep recession. If you’re in Australia, I think it’s worth considering if your current superfund is actually what’s best-placed to hedge against a recession.

The 2007/08 Global Financial Crisis (GFC) saw tens of billions of dollars wiped from these Funds. For my personal situation, I have been digging into Self-Managed Super Funds (SMSF) and specifically their viability in the crypto space. Before you read on, allow me to reiterate, this is not financial advice but my own opinion, based on my own personal situation. Always seek your own advice from a trusted and qualified source.

Both Squirrel and New Brighton Capital offer ‘all-in-one’ SMSF products designed for cryptocurrency investments. They manage the set-up, auditing and yearly accounts. The table below demonstrates comparative costs, New Brighton Capital seem to have a raft of additional admin-type fees and from a value POV, I reckon Squirrel have them pipped.

Coinspot is important for after you have your SMSF setup, they tout themselves as the tool to buy the assets you want to hold in the SMSF. A trusted marketplace for SMSFs to trade and swap cryptocurrencies. They offer 130 cryptocurrencies plus pairs and swaps, over the counter trading (OTC) for large purchases and user-friendly UI and a full EOFY tax pack specifically tailored to SMSF needs.

Unfortunately, none of the three companies offer fully-insured custodial services for holding your crypto assets,  you should keep the above in mind, as your SMSF assets need to remain separate to personal and given the need to move them off the exchange to cold storage for maximum security, you would require an entirely different wallet setup.

Just like any other asset held in SMSFs you can’t mix business with personal.

This week has had extreme fear grip the markets, bitcoin held in the mid $9k USD range as fear dropped in and out of the 20-40 point range. Generally speaking, this signals a fearful market which can present good buying opportunities. Many believe that a dollar cost averaging (DCA) approach to the market is best in this current environment as it eliminates the concerns around trying to trade peaks and troughs. In its simplicity DCA represents buying a set amount of bitcoin or other cryptocurrency at regular intervals (e.g. monthly) and putting them away for long-term appreciation. You will continually build a position in the market at regular intervals. This would mean you purchased the majority of your bitcoin below the all-time highs, and significant amounts in the $3-$3k USD range earlier this year. DCA also eliminates the emotion that comes with the large swings we are seeing in the market from margin trading and manipulation.