What happened in January?

In light of our recent Bitcoin market updates to our members, we thought it would be appropriate to provide a general overview of the market for the last month or so and any associated news!

January was a rollercoaster ride for cryptocurrency enthusiasts and investors alike. We initially saw in the first 10 days, Bitcoin crash from 47k on the 4th of January down to a low of $39.5k on the 10th of Jan, before finding some strength and beginning to consolidate. It was a tumultuous period for all, with no clear direction of whether the market would continue to dip, or BTC would be able to recover. However, by mid January, BTC continued its downward momentum, tumbling into the low 30’s.

As mentioned in our BTC analyses on the 8th of February, there were a few possible explanations for the continued downward trend of BTC and subsequently the rest of the market. On the 21st of January, we saw the price of BTC fall from $43,300 to $34,600 in a single day, with most cryptocurrencies following, causing a $350 billion market capitalisation wipe out.

On January 24th, China passed legislation to shut down all Bitcoin mining in the Sichuan province as well as making all cryptocurrency transactions illegal. This lead to a huge dip in the market, with the leading cryptocurrencies of BTC, ETH and BNB taking dips of -6.33%, -12.2% and -10.10% respectively.

Moreover, there was increased regulatory involvement by the U.S. government, with new legislation pertaining to cryptocurrency in the infrastructure bill. With the cryptocurrency market still being relatively “new”, any form of fundamental news such as tightened regulation can cause great volatility. This was evident in both the China & US cases in January.

There is also much belief that the cryptocurrency market falls in sync with the stock market. Prior to covid-19 sweeping the globe and its associated markets, Bitcoin and Ethereum in particular rarely followed major stock indices. Throughout their infant years, they were actually perceived as a hedge against volatility in other asset classes. There was no indication that BTC and ETH, or any cryptocurrencies, followed the S&P 500 throughout the bull run of 2017 and subsequent bear market throughout 2018-2019, with the correlation coefficient was as low at 0.01, before rising to as high as 0.36 for the 2020-2021 years. The increase in positive correlation can be viewed below: 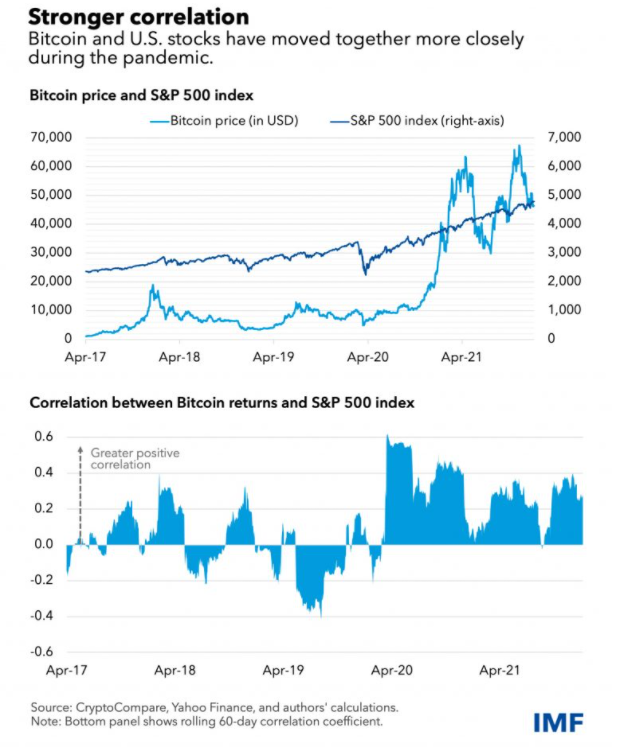 However, in recent weeks we have seen the market recover nicely, with the entire cryptocurrency market pushing past a total capitalisation of $2 trillion once again. BTC has seemingly stabilised, rebounding to its highest price in 2.5 weeks, being the threshold of $40,000 on February 4th, pulling the rest of the market with it. There is no clear set in stone reason as to why BTC is bouncing nicely, however, in recent days we have seen a lot of positive fundamental news which certainly helps.

Off the back of our article on state Senator Wendy Rogers introducing a bill in Arizona that would make Bitcoin legal tender in the state, we have seen more and more positive signs come out of the US. Ted Cruz, another prominent Republican figure, stated that he has been expanding his Bitcoin investments, purchasing a large number of BTC on the dip. Cruz has been known to support the adoption of cryptocurrency and blockchain for months now. Additionally, a Tennessee lawmaker has introduced two bills on the 2nd of February, proposing the allowance of Tennessee, associated counties and municipalities to invest in cryptocurrency and blockchain, as well as following in Arizona’s footsteps in establishing a committee aimed at the studying and understanding of cryptocurrency and blockchain.

Huge news to also come out of the U.S. in the last 24hours is the largest financial seizure ever, with U.S. law enforcement agencies seizing over $3.6 billion in Bitcoin out of the stolen $4.5 billion Bitcoin from the 2016 hack of Bitfinex.

In political news overseas, despite much FUD around Russia and cryptocurrency throughout January, it was announced in the last 24 hours that authorities in Russia are now expected to recognise cryptocurrency and digital assets as a form of currency according to local news reports. It is rumoured that the Bank of Russia and the government have established an agreement on the regulation and laws surrounding cryptocurrency, with drafted laws expected to come in the coming weeks. Other separate reports also state that President Putin and the government are also backing plans for the lawful regulation of the nation’s cryptocurrency mining industry as well.

This week we have also seen huge positivity come out of institutions. One of the world’s largest international accounting firms, KPMG, announced that its Canadian office has purchased both Ethereum and Bitcoin for its corporate treasury. Benjie Thomas, managing partner at KPMG’s Canada office stated “this investment reflects our beliefs that institutional adoption of cryptoassets and blockchain technology will continue to grow and become a regular part of the asset mix”.

In the following days, JP Morgan also asserted just today that they see Bitcoin hitting $150k in the “long-term”. The world’s largest asset manager, BlackRock, has stated they will begin to offer Bitcoin trading services to its investor clients. BlackRock currently has over 1,500 institutional clients and manages over $10 trillion in assets for institutional investors, as well as owning a large portion in the largest corporate holder of Bitcoin, MicroStrategy. Furthermore, cryptocurrency asset manager Valkyrie will now have an ETF with exposure to Bitcoin mining firms available for trading on the Nasdaq Stock Market.

With such positive news, are we finally seeing the negative trend broken? See BTC’s chart below: 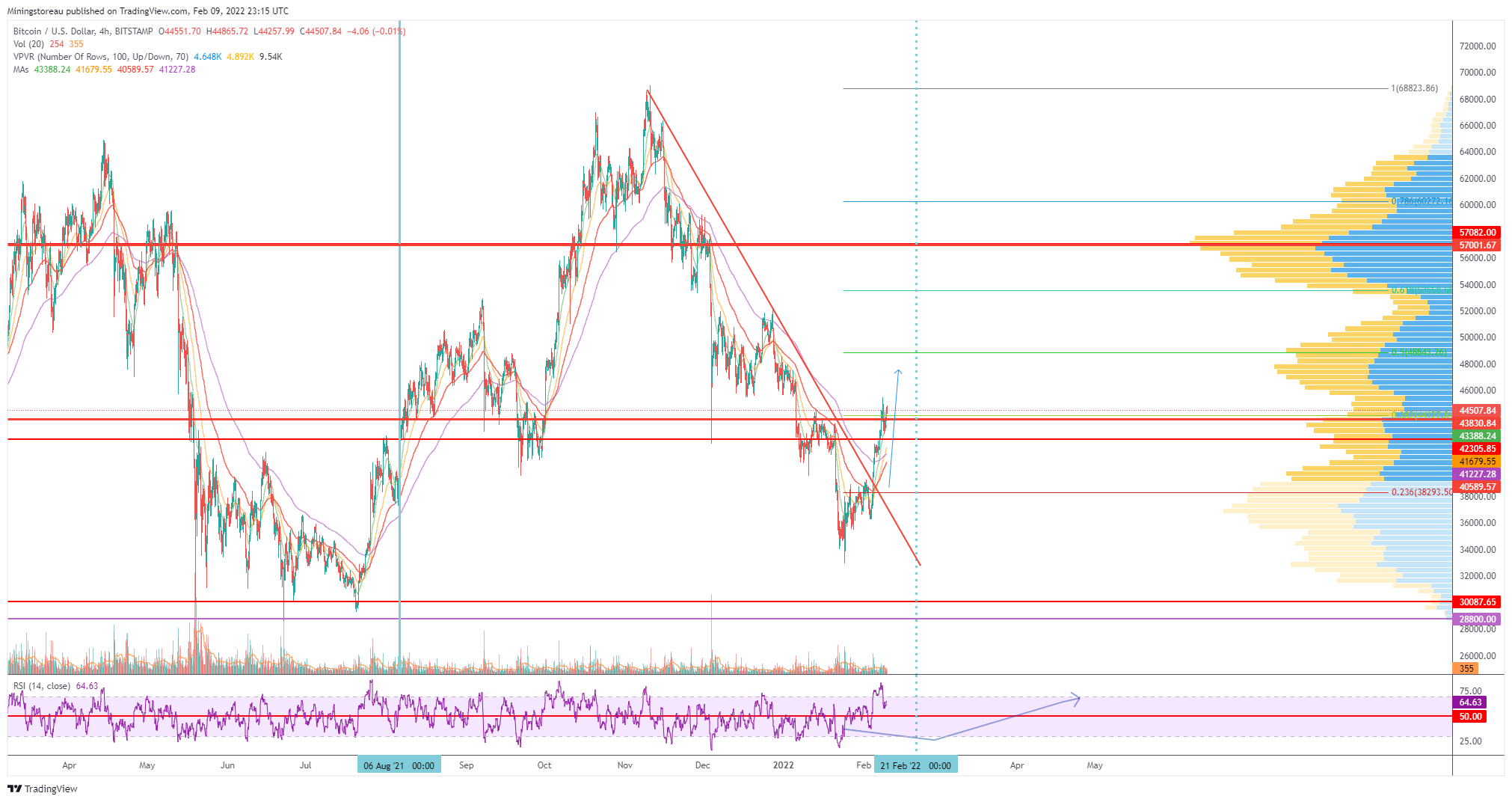