Legislation To Help Australia Play A Part In The Emergence of Web 3.0 & Digital Assets

Australia’s federal government is considering legislation to help Australia play a role in the emergence of Web 3.0, a new form of internet that underpins cryptocurrencies and digital assets.

Web 3.0 refers to the third iteration of the web, succeeding Web 1.0 of the 1990s, and the current version of the internet, Web 2.0. Web 3.0 is based upon blockchain technology, utilising decentralisation and token-based economics, which will allow for the processing of information through technologies such as decentralised ledger technology, Big Data and machine learning.

The ultimate goal is to interconnect the internet through decentralisation, which is the opposite of the current generation of internet (Web 2.0), whereby data is stored mostly in centralised repositories.

The new proposal will seek out businesses and individuals for feedback on its plans to overhaul custody arrangements and licensing for digital assets. This extends to requirements such as breach reporting obligations, compliance with anti-money laundering laws and a strategy on how to classify cryptocurrency assets, according to a government paper released Monday.

Web 3.0 and digital assets is what the Treasury sees as a source of new jobs and tax revenue for the economy.

Minister for the Digital Economy, Jane Hume, will tell the Blockchain Australia event that “decentralised finance, which allows banking-style “services to run on decentralised networks without the involvement of intermediary banks and exchanges”, is “one of the most exciting frontiers I have seen”.

“We want to encourage innovation in crypto assets – innovation creates jobs and growth,” Senator Hume will say. “There are so many innovative use cases for crypto assets, many of which are not far at all away from becoming mainstream. These include international payments, lending and borrowing, NFTs and asset tokenisation.”

“Australia is serious about getting regulation right for the digital age and emerging technologies like crypto are key,” Hume said.

In getting serious, the proposed Digital Services Act (DSA) legislative package calls for reforms in crypto market licensing, custody, decentralised autonomous organisations (DAOs), debanking and taxes.Senator Bragg said in his address at the conference that he expects the legislation in the Act to “protect [crypto] consumers against malicious operators.”

Senator Bragg outlined the four main pillars that the DSA is guided by. He explained that the DSA would be technologically neutral, have broad and flexible principles, be regulated by a Minister rather than a bureaucratic agency and use government resources and personnel. In his view, such guidance will help Australia show that the country is ready to take a greater role in the crypto industry.

Senator Bragg had a more challenging tone when discussing DAOs, telling multiple branches of government to start taking them seriously, even labelling them as “an existential threat to the tax base” under the current rules in place. 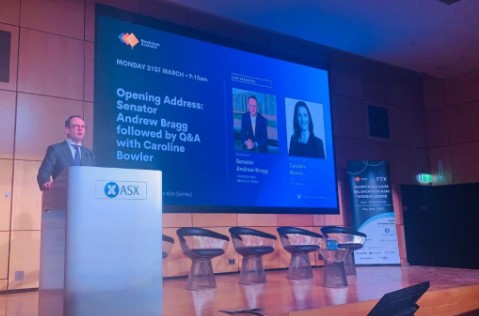 As mentioned in our prior Russia-Ukraine conflict articles, there are serious concerns in the cryptocurrency market about its use by individuals and nations to circumvent global economic sanctions. Currently, the federal government is powerless under the current Digital Currency Exchange (DCE) laws to serve retribution on such offenders.

It’s not only important for Australia to push forward with cryptocurrency regulation but the wider cryptocurrency market too. Head of corporate development at Australian Cryptocurrency exchange Swyftx, Michael Harris, added that the land down under should be leading the developed world in crypto regulation because of its high rate of adoption. A survey from pollster Finder found that 22.9% of Australians surveyed owned crypto from October to December 2021.

The Treasury is expected to have most of this finalised by the end of 2022.