It was learnt in mid March that Do Kwon, founder of Terraform Labs and Ethereum layer 1 blockchain competitor Terra, was planning to accumulate US$10 billion worth of Bitcoin (BTC) to add to the project’s stablecoin reserves.

$UST with $10B+ in $BTC reserves will open a new monetary era of the Bitcoin standard.

As of writing, BTC’s current spot price is roughly $43,500, which would mean $10 billion USD would represent purchasing 229,885 BTC. To represent how much BTC this actually is, MicroStrategy, one of Bitcoin’s largest whales, holds 129,218 Bitcoin.

It is purchasing the BTC through the Luna Foundation Guard (LFG). LFG is a non-profit organisation based in Singapore that works to cultivate demand for Terra’s stablecoins and “buttress the stability of the UST peg and foster the growth of the Terra ecosystem.”

Since Do Kwon’s plans were learned, onchain data shows the Luna Foundation Guard’s bitcoin wallet has added 5,040 bitcoin to its reserves.

As a result, there’s been positive price action with Luna. As of writing, there has been a serious market downturn of all coins following BTC pulling back into the 43k region. Terra being the only top 10 project that is in the green the last week, see the screenshot below: 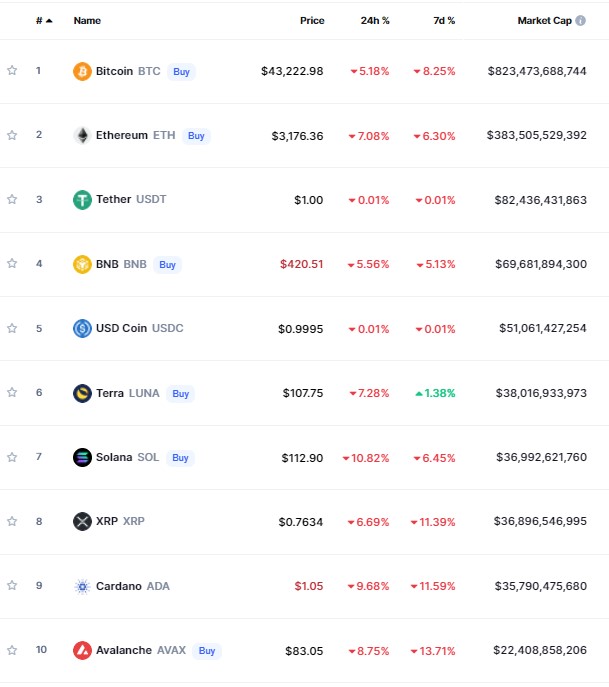 So why is Terra accumulating so much BTC?

According to Kwon, a Bitcoin reserve will help improve UST’s ability to keep its dollar peg.

Unlike centralised stablecoins like Tether (USDT), TerraUSD isn’t backed by greenbacks. It’s instead tied to LUNA, which means that whenever someone mints UST, they must also burn LUNA.

“The reason why we are particularly interested in Bitcoin is because we believe that [it] is the strongest digital reserve asset,” Kwon told Bloomberg earlier this month. “UST is going to be the first internet native currency that implements the Bitcoin standard as part of its monetary policy.”

At the core of Terra’s value proposition is the idea that Bitcoin has so far failed its original objective, which was to become a peer-to-peer electronic cash system, as well as best functioning as a reserve asset.

Luna’s whitepaper actually imposes its own system of stablecoins, “a successful new digital currency needs to maximise adoption in order to become useful. We propose a cryptocurrency, Terra, which is both price-stable and growth-driven. It achieves price-stability via an elastic money supply, enabled by stable mining incentives. It also uses seigniorage created by its minting operations as transaction stimulus, thereby facilitating adoption”.

This means to bring about a true usefulness of a “stable currency” in Terra, alleging it can retain “all the censorship resistance of Bitcoin [while] making it viable for use in everyday transactions.”

Seemingly, Do Kwon has thoroughly enjoyed this entire process. 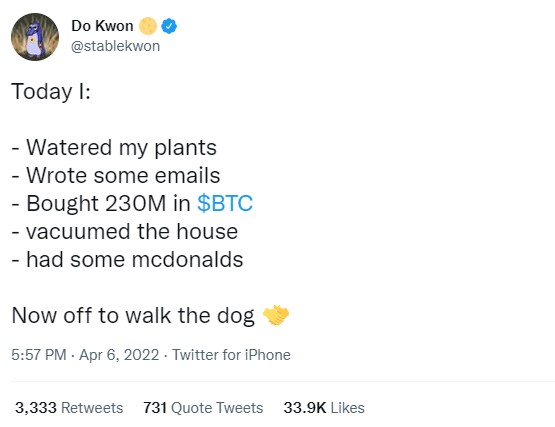 After the latest purchase of 5,040 BTC for that rough $230m figure, LFG now holds roughly 35,768 BTC which is worth roughly $1.55 billion. This would make it the 21st largest Bitcoin holding, up from 29th only just a few days ago.

This is an important development for stablecoins. As the industry and the wider economy increase their dependence on stablecoins, the reliability of its ability to be pegged becomes paramount.

Terra, being one of the most integral stablecoin projects in the market, moving towards a Bitcoin backed Stablecoin could prove a crucial development in the journey for fiat-backed digital cash.