We arrived in beautiful Austin, Texas, to 40 degree weather, dryness, and a whole heap of flavoursome individuals! We were in Austin to attend Consensus by CoinDesk, since 2015, Consensus has been the central meeting point for those committed to decentralising the world. Curated and produced by CoinDesk, the most powerful and trusted name in crypto journalism, Consensus is the only event showcasing and celebrating all sides of the blockchain.

Upon arrival at Consensus, we were very excited to get underway at the Trade Show and see all the different projects and different companies, and what they had to show. There were over 18,000 people in attendance in person, so it was busy! There were also over 50,000 who attended virtually. Below are a few highlights of the stalls we attended and found worthwhile mentioning.

Our first and main stop was at Bitmain, which had on show the new S19 XP HYD – we have an article that we released detailing the exciting upcoming release of these miners in Q1 of 2023, which can be accessed here.

As mentioned in the article, being the world’s largest manufacturer of cryptocurrency mining equipment, Bitmain’s new S19 XP Hyd has the greatest power efficiency among all of the company’s rigs.

We are looking forward to getting our hands on these in the future for you guys. Take a look at some of the photos below! 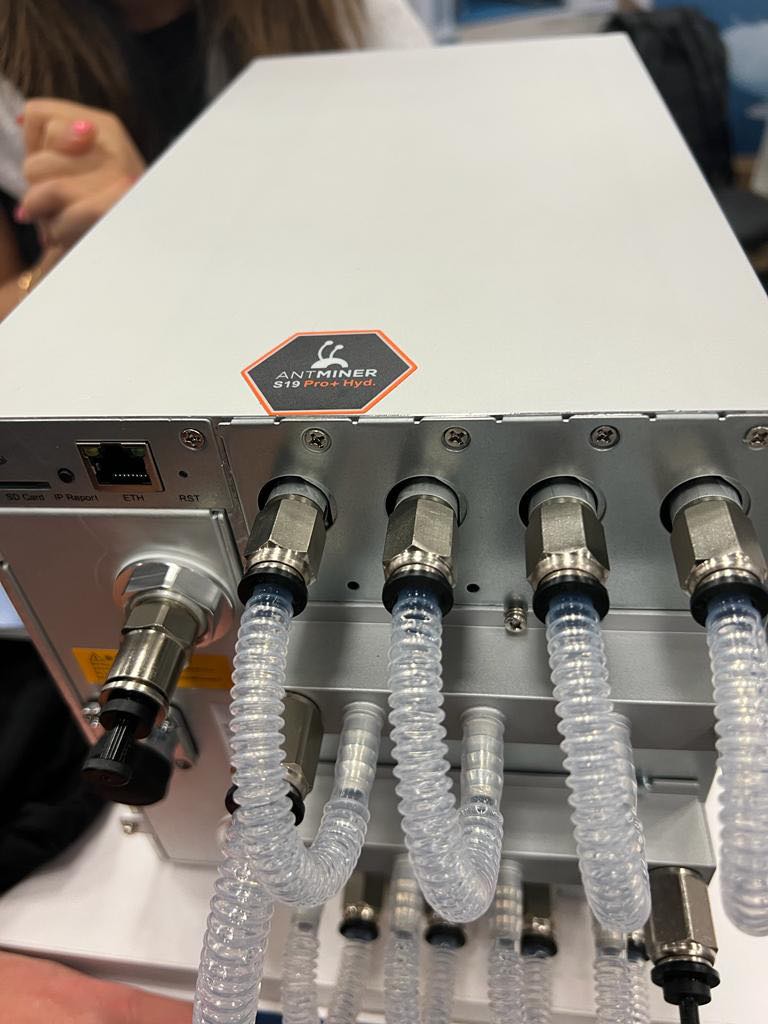 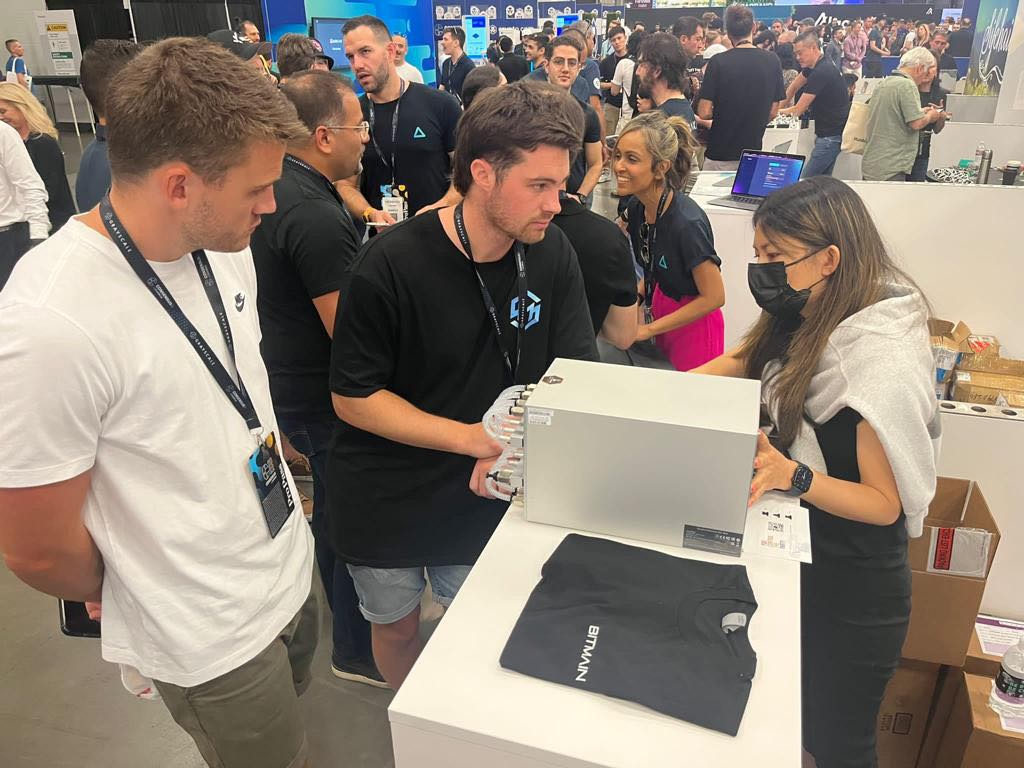 We were also able to visit the Beefy stall!

Beefy Finance is a Decentralised, Multichain Yield Optimizer that allows its users to earn compound interest on their crypto holdings. Beefy earns you the highest APYs with safety and efficiency in mind.

Some of you may not know Beefy, or some may be experienced users. For those that aren’t, it is a great platform to dive deep into the world of DeFi and implement certain strategies, such as the ones mentioned above, to earn passive income. We will be utilising Beefy in our upcoming release of our DeFi Course in the coming months, stay tuned! 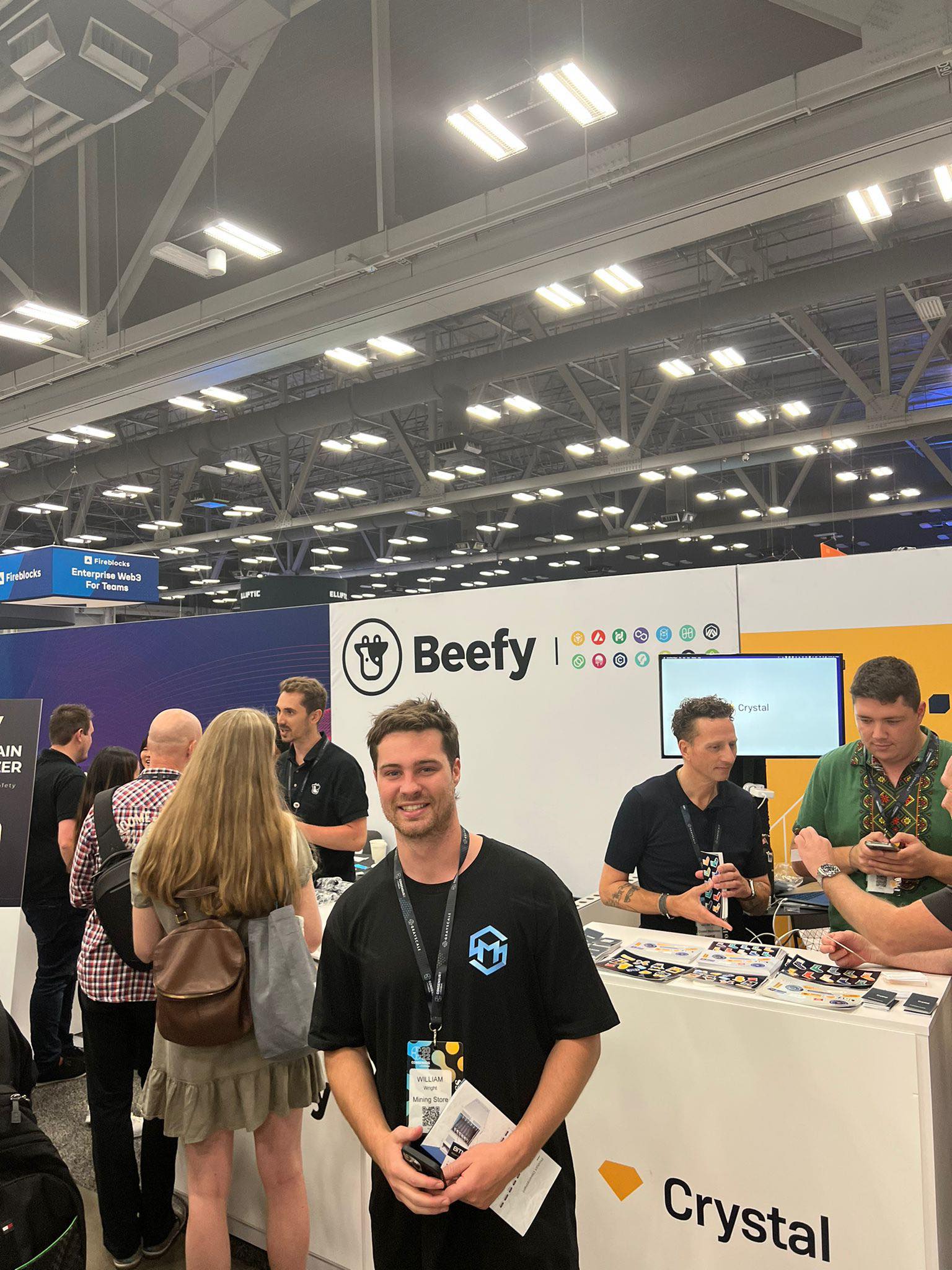 Other stalls that we visited to kick us off included Metamask, FTM, Binance, ADA and Chainlink among others.

On the opening two days we were also able to go to various stages and listen to some incredible speakers on all things cryptocurrency and blockchain.

One of the first speakers we were able to see was Kimbal Musk, Co-Founder and Executive Chairman of Big Green. Big Green is a 501 non profit organisation that was started in 2011 by Kimbal Musk and his partner in The Kitchen restaurant group, Hugo Matheson, with the belief that every child should have the opportunity to play, learn and grow in healthy communities.

In the fall of 2021, Musk launched Big Green DAO. Here’s how it works: First, he kicked in $1 million of his own money as “skin in the game.” The DAO donors then selected six worthy non-profits, and each of the non-profits received $50,000. Those six non-profits then voted on which batch of recipients should receive the next round of funds – and each quarter they dole out more. Rinse and repeat.

The Big Green DAO is up and running; dollars are flowing to those who need it. The DAO has raised a total of $6.5 million. Over 1,700 people have donated. There are now 16 non-profits – generally with a food justice bent – that, along with the donors, are voting on how to distribute the funds.

Musk was able to at length describe the positives of DAOs, cryptocurrency and the blockchain community and how it is positively impacting not only on his own ambitions, but the world as a whole. However, he did mention how DAOs can have a lack of transparency and decentralisation if it is the same two or three people constantly holding the voting rights and making the decisions. A great, informative talk on DAOs and their growing importance! 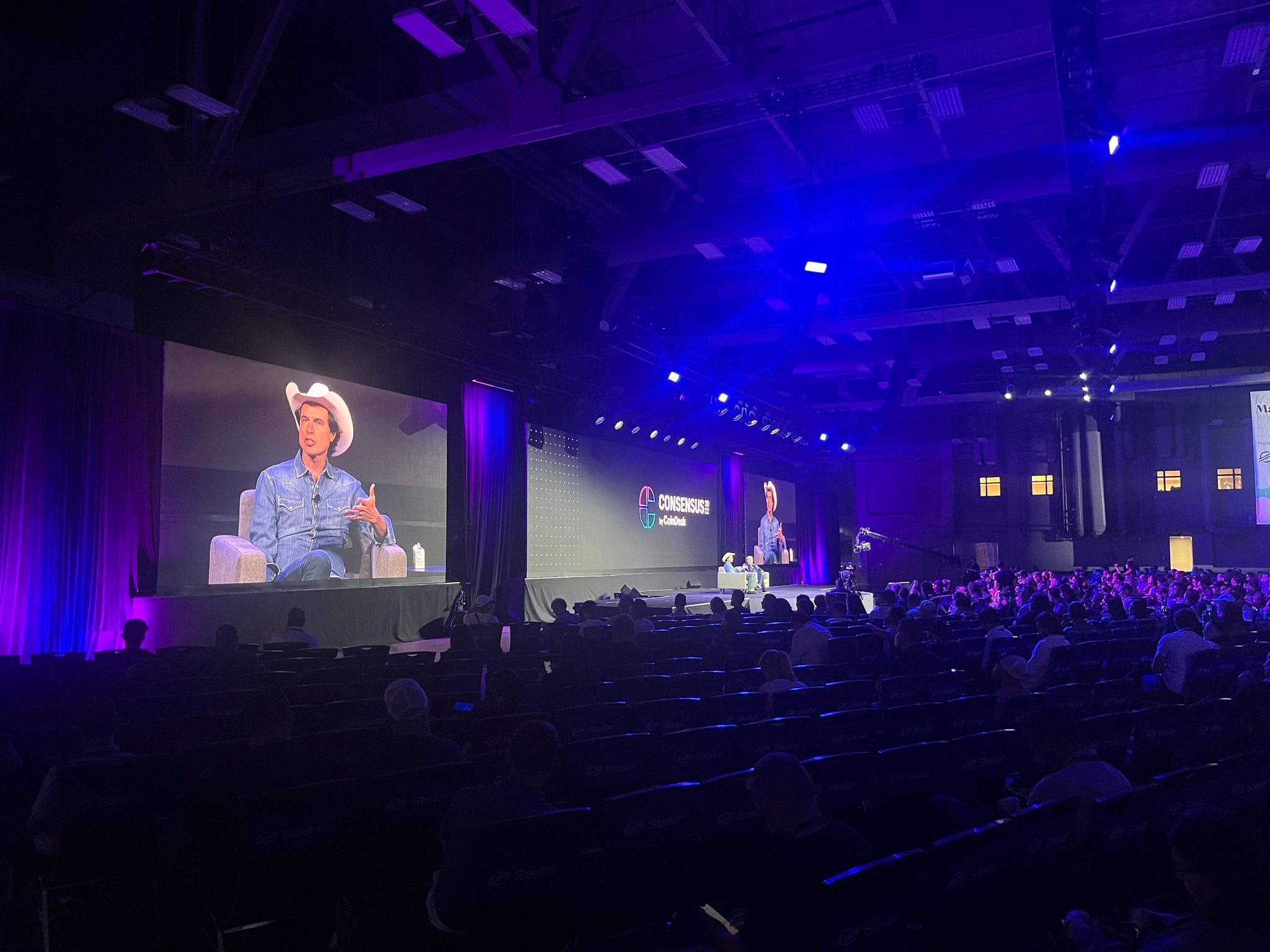 Dan founded Pantera Capital in 2003 – managing a billion dollars in hedge fund strategies. He previously served as Head of Macro Trading and CFO at Tiger Management with Julian Robertson.

Both Dan and Mike were able to provide some great insight into the longevity and importance of blockchain technology. Being an early investor, he understands the long game, the crypto winters, the ups and the downs. Reaffirming the fact that as an investor in cryptocurrency, yes it is speculative, yes you are there to make a profit as an investor, but it is the underlying technology that you are investing in in the long term. This is very important as blockchain enthusiasts to understand. There will always be ups and downs, but we are here for the long term.

We were also able to congregate with our fellow Australian enthusiasts!

After a highly informative first two days at the Trade Show and various stages listening to important figures in the industry, we were able to meet up and chat with fellow Australian blockchain and cryptocurrency enthusiasts. There were over 100 of us there! This included the likes of Jamie Kennedy (director of FTX Australia) and Steve Vallas (CEO of Blockchain Australia), as well as many more. A photo of Steve Vallas and ourselves is below: 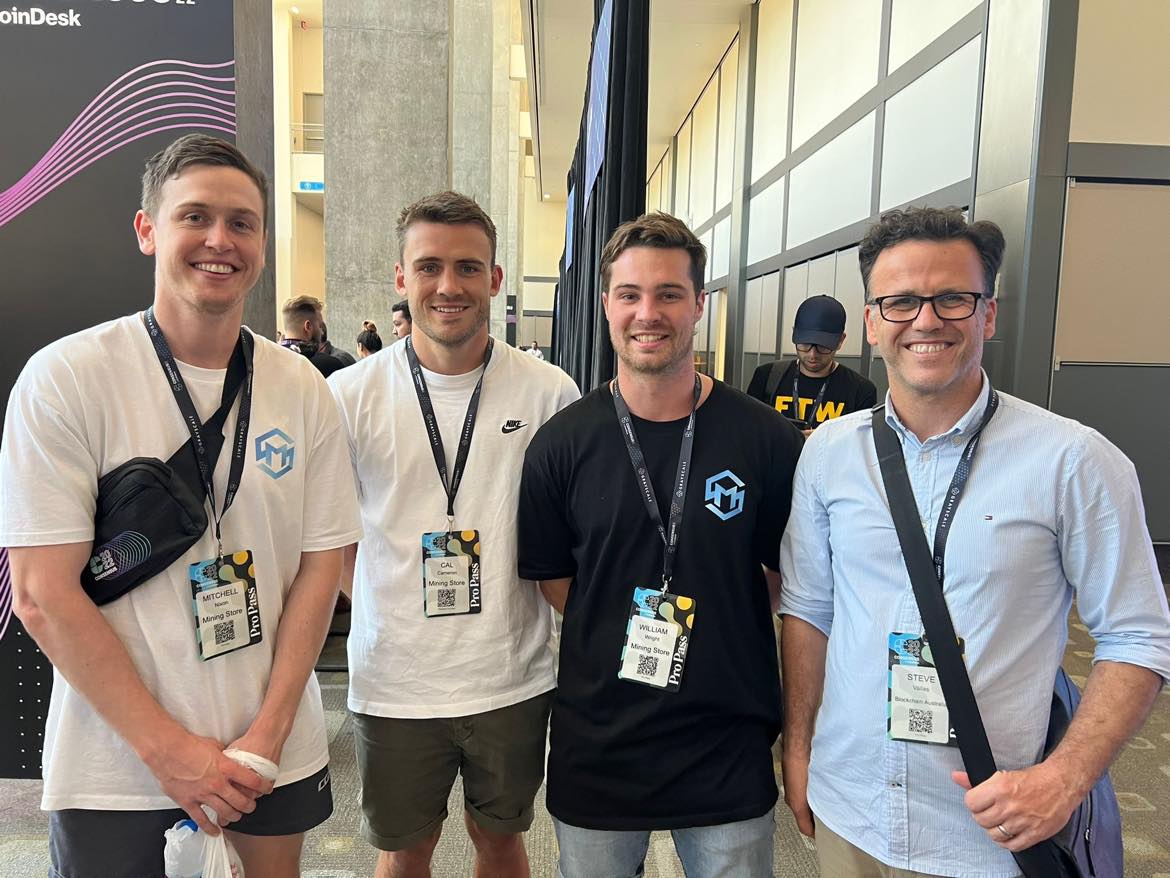 A great first two days to kick us off. Days 3 & 4 will be released soon!